Just a glimpse of our website will show you just what a fabulous venue That Amazing Place is for your wedding but we know only too well, in an age of social media and online reviews, that people want to hear from loving couples just like themselves. With this in mind, we decided to talk to some of our recently married couples to give you an idea of not only our fantastic venue, but a little insight in to their wonderful stories too. Sit back, relax and enjoy over a nice hot cuppa (or cocktail if the sun’s still shining) and simply imagine yourself here saying those rather important two words, “I do”. In the first installment of “That Amazing Place Real Weddings”, we decided to speak with Dani and Jay Purcell… 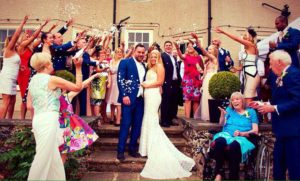 Dani and Jay have been together just over three years but knew each other a little longer than that. Their love story began with a somewhat clichéd meeting at work, which I’m sure a lot of us can relate to and like a lot of good love stories, Dani chose to play hard to get. Jay however, had other ideas and chased the woman he’d fallen head over heels in love with. It wasn’t all plain sailing however as their jobs took them in opposite directions, but that wasn’t stopping Jay as he decided a little later down the line to make his feelings for the feisty truck rentals worker clear. They eventually became friends on social media and the rest, as they say, is history.

In true Jay style, he decided to propose in front of both of their friends with red roses and a Haribo ring! Thankfully, he took his blushing bride to be to Hatton Garden the following day to let her choose a ring, something Dani was very pleased about.

Once the ring had been chosen, it was time to find the venue and that’s where That Amazing Place comes in. Now what you may not know is that Dani happens to be good friends with a certain someone here at That Amazing Place and after a little helpful nudge, was persuaded to come along and take a look, “My best friend Angie had been running the weddings there for a while. She said there was no pressure but to come down and look at it to see if it was what I wanted.

“As soon as I was shown around I loved it; it was a beautiful sunny day and the grounds looked stunning. I loved the idea of it being solely ours for the day, no other guests from other function rooms, just all of our friends and family together. Plus having your best mate to organise things always helps and took pressure off me and I know what a perfectionist she is.” 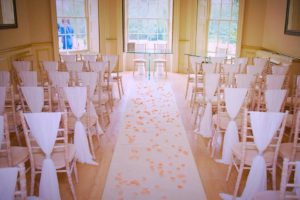 Dani chose, instead of a theme, to simply keep things neutral which she said matched the décor perfectly. Jay, her groom was also pretty chuffed at having the front of the house fully cleared and blocked off especially to allow for his love of retro cars to be included on the day too. Their photos were made even more personal with the addition of their own, as well as friends, retro cars parked up behind the happy couple.

Wedding aside, there was one aspect of the day that Dani was particularly pleased with and that was the service she received surrounding her disabled mother. Despite That Amazing Place being a listed building, which makes disabled friendly adjustments not always possible, Dani felt the service was outstanding, as they did their best to accommodate her mother in spite of not having all disabled friendly facilities in place. 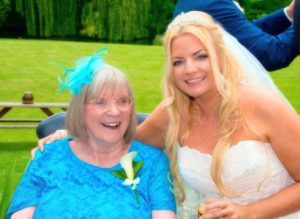 So the question remains, would Dani change anything from her day? “We would do it all over again in a heartbeat,” She said, “and not change a single thing.” 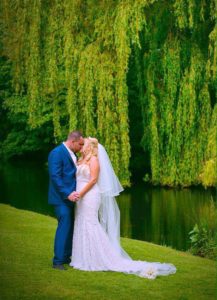